What to do? Sights Kalvarija

Admire the vineyards on the slopes

As on all the other hills on the northern side of the town you can also cool off in the shadow of the green forest on Kalvarija, or admire the beautiful vineyards that adorn its slopes.

On top of the 375 metre high town hill stands the Church of St Barbara, the way to the church leads past four chapels and abundant vineyards, which enrich the already pleasant view of the town below.

A wonderful view of the city!

Due to the overgrown hilltop, the view in front of the church is somewhat restricted but if you slowly descend the short forest path to a flat plateau, which leads through the vineyards then you will get one of the most beautiful views on the city, with the forest background of Pohorje mountain to the south, the plain of Dravsko polje and hills of Sloven­ske gorice to the east, and in the west a view of Kozjak and the valley of the river Drava, which at this point flows between Pohorje and Kobansko into the plain of Dravsko polje.

You can also reach the church by climbing 455 stone steps!  These steps lead up the hill, which is part of the estate of the Biotechnical schools Maribor. This path is a very popular place for walks among the people of Maribor.

In gratitude of the inhabitants of Maribor

In the year 1683 the people of Maribor in gratitude for the cessation of the plague, which unmercifully hit the town, made a pilgrim's path up Kalvarija (Calvary) and on the top built the small church of St Barbara and St Rosalia. During the national awakening of Slovenes and Germans in the 19th century, Kalvarija became a synonym of Germanism in the town. Consequently it was called Nemška Kalvarija (German Calvary); in the meantime the hill Pekrska gorca on the other side of the river was named Slovenska Kalvarija (Slovene Calvary). 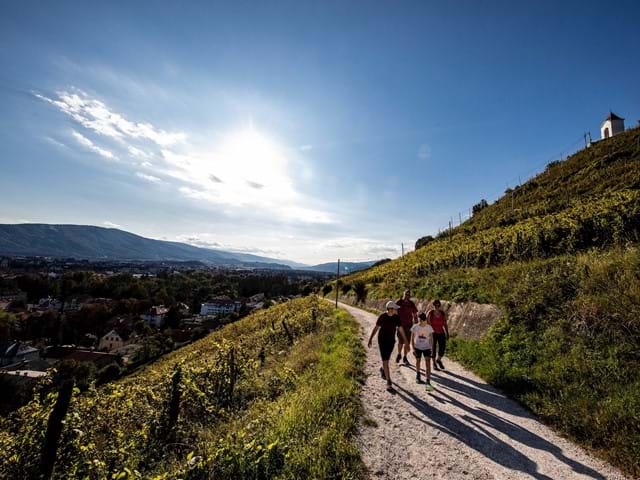 Discover the natural riches of the wider surroundings of...